New Zealand was always a dream destination for me and been in my bucket list for quite some time. So when a plan came up for it; it was an easy decision to say yes. The travelling party consisted of; apart from Sruthy and I; our friends Aravind, Manju, Rahul & Kalyani. We all flew in from different parts of the world and joined together in Auckland to embark on this amazing road trip.

What follows are our experiences during the fortnight that we spent exploring New Zealand.

We started our journey from a quaint little hostel in a quiet little neighbourhood of Auckland very close to Mt. Eden. This small mountain had given us some spectacular vistas of the sunset skyline of the city that night. We even managed to get our first glimpse of the ‘everything closes early’ phenomenon of New Zealand. First, our car pretty much got stuck up there because the gates leading out of the park were already closed by the time we were moving out. Fortunately, some local guys made the same mistake and led us through a secret (probably illegal) exit. 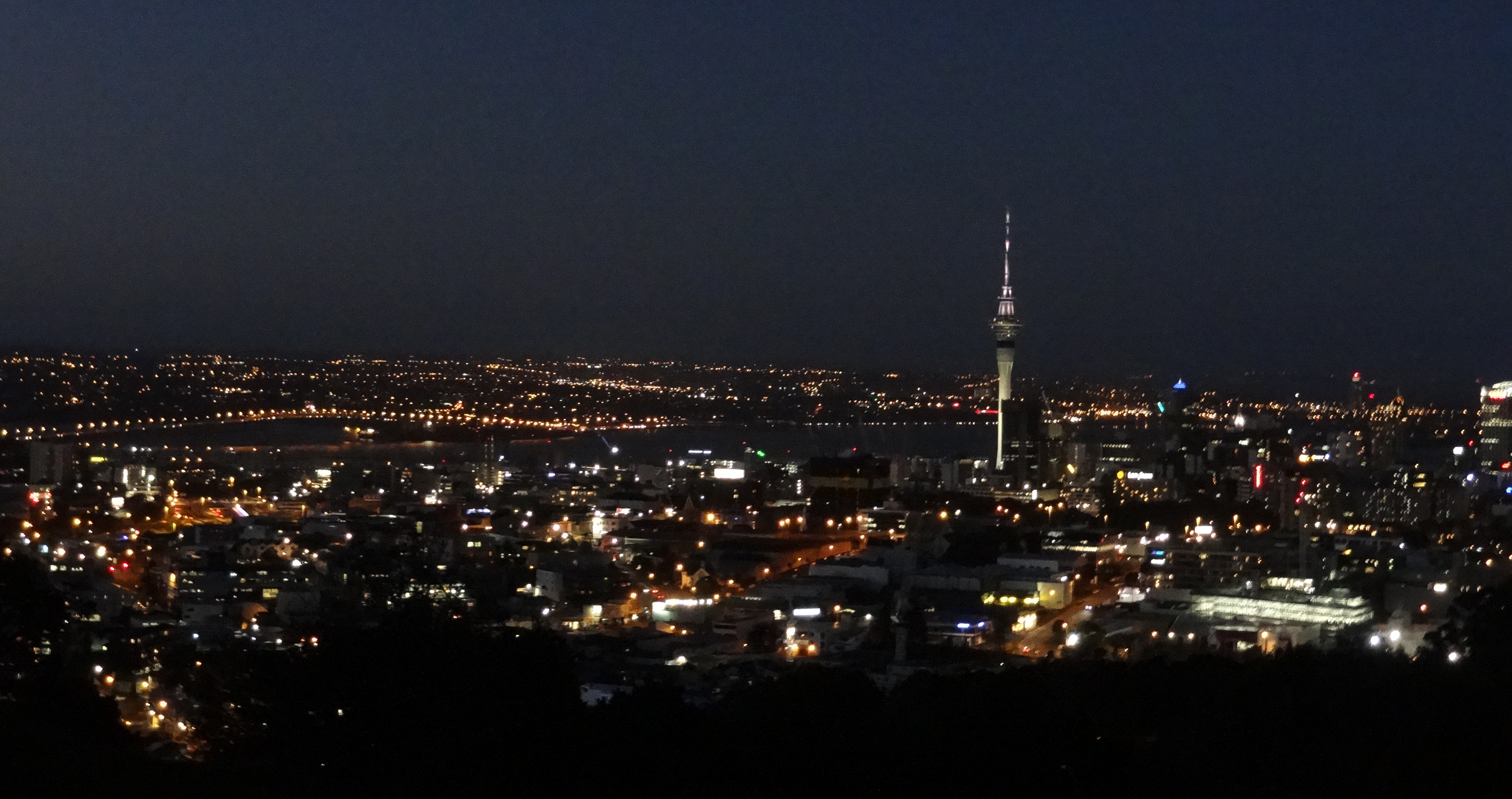 Having narrowly escaped that drama; our next target was to feed ourselves for dinner. Now this was more complicated than we would have ever thought. First of all, I was having trouble getting into terms with the automatic car; not having driven one in ages. Muscle memory was making my left leg search for the non-existent clutch and hitting the brakes instead. My reputation as a driver was getting some serious damage; but let’s just say the car ebbed and flowed till we managed to find an open restaurant. The restaurant was not going to be open for very long though; but by some twist of fate; our superhero Rahul had somehow randomly met the restaurant’s owner on the street a few hours before. That much was enough for him to consider us as his friends and to hold the kitchen open just for us. First taste of that amazing Kiwi hospitality and awesomeness! It was funny to watch him be so defensive when we ordered some curry. “This will not be quite what you expect”. But then it turned out really good and he was almost in disbelief when we complimented him on that.

The bay and a crazy park

Next day morning and it was time to start our epic 3,500 km drive through the nooks and corners of the Kiwi country. The ‘burden’ of driving fell on Aravind and Manju, while I sat in the back sulking about my shattered dreams of cruising around the countryside; still not confident about my skills on an automatic. After a stop at a small coffee roastery and at a McDonalds in a town curiously named Bombay, we hit the impressive coastline of the Firth of Thames. The road wound along slow, hugging the pristine azure sea and presenting a few quaint little towns on the way.

A few kilometres up and near the town of Coromandel, we decided to check out The Waterworks, advertised as New Zealand’s quirkiest theme park. Located on the 309 road, it sure lived up to its name with a ton of water based quirky contraptions guaranteed to give you a few smiles. There is also a short zip-line adventure to give you a slight adrenaline rush. We eventually spent a couple of hours there and proceeded along to Hahei. The 309 road to Hahei in itself is a bit of a tourist attraction mostly because it is a narrow gravel road amidst a thick forest and tall Kauri trees. This deserted road also gave me an opportunity to finally hone my driving skills and by end of the stretch – viola I’m back!

Trek to a cove

An hour later we had arrived at Hahei and our plan was to do a trek to the famous Cathedral Cove. After a bit of a struggle to find parking, we managed to park in one of the nearby houses by paying the guy a few dollars. The trek was down a cliff and was a bit more tiring than we had anticipated. But 40 minutes of hard work later; the reward was just amazing. An isolated beach awaited us with out of the world scenery. In fact, there were two mini-beaches side by side connected by a short rocky tunnel. The inside of the tunnel has a glorious dome-like rock ceiling from which the place probably gets its name. A great place to chill on the sand and take a dip in the cold sea. And of course, not to forget the great frames for some nice photos. The walk back was more of an effort since alas there was no reward awaiting us back in the car. 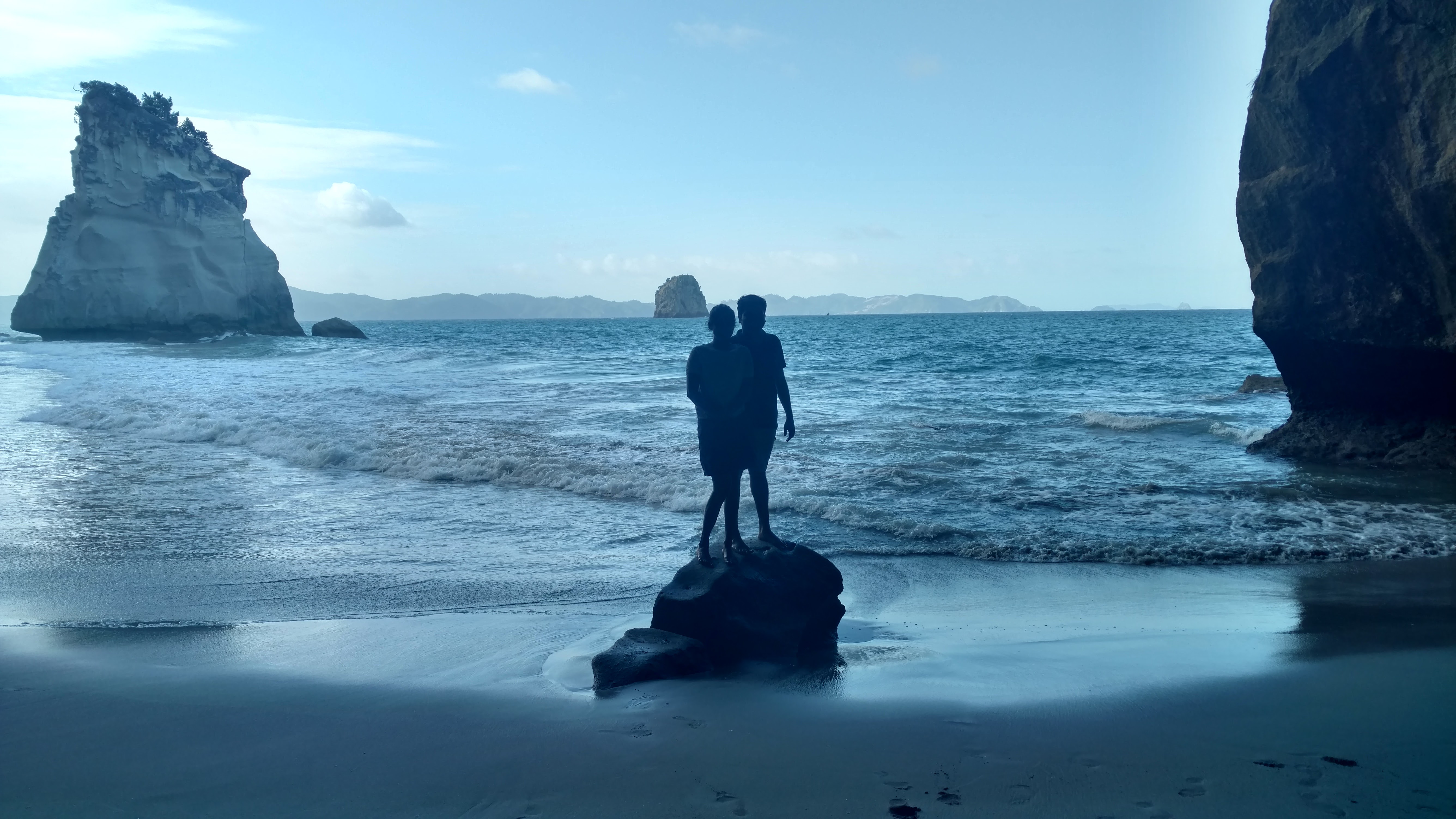 With that done we had an hour more drive to get to Te Aroha our stop for the night. On the way while stopping for fuel at Tairua; we met this wonderful lady who spend a good half an hour chatting with us generally on life and her love for nature. She had quite amazing perspectives on life; making us ponder about the glory of a life so close to nature. What better place for that thought lingering in our minds, as we slowly drove forward with the scenery of the pristine countryside advancing outside our windows, while the summer sun took leave of us for now.

A dive from the skies

After a good night's sleep at a fantastic AirBNB in Te Aroha, we started the day with our first chance at NZ famed adventure sports scene. We were going sky diving! The adrenaline rush started a bit early though; since we had to do a 170 km ride within 2 hours to the sky diving centre early in the morning to reach on time. In the end though, Aravind took care of that easily and we managed to keep our appointment just about.

Having done all that however; sadly the dive was delayed because of some maintenance issues with the airplane that was supposed to take us up. The guys at the Taupo Tandem Skydive centre were quite awesome though and kept us entertained (and a bit scared) while we waited. Aravind and Manju got to go first and were all thrilled and fired up after they were done. The rest of the four were lucky enough to go together in the same plane. Assured that my tandem partner, Richard had been doing this for more than a decade, I gathered up some strength to atleast act brave and took my seat on the plane. Sruthy seemed to need no such encouragement as she seemed to have fallen head over heals for her jump mate (even though he secretly told me that he could take care of her if I just say so).

The plane ride up was the ultimate build up to what was coming. The ground zoomed out farther and farther away; as I was left wondering how high 15000 feet was anyway. Having to put on an oxygen mask while in the plane, due to the thin air at altitude, just added a bit more spice into the whole drama. Finally the bell rang and it was time for the jump. We were the last to jump out and while at the window I could just about catch a glimpse of my friends, small blimps free falling. I had always thought this would be the time that vertigo kicks in and this would be the moment that I'll hesitate; but in reality there was no time for any of it. I just got a quick and firm push from behind and lo we were flying! 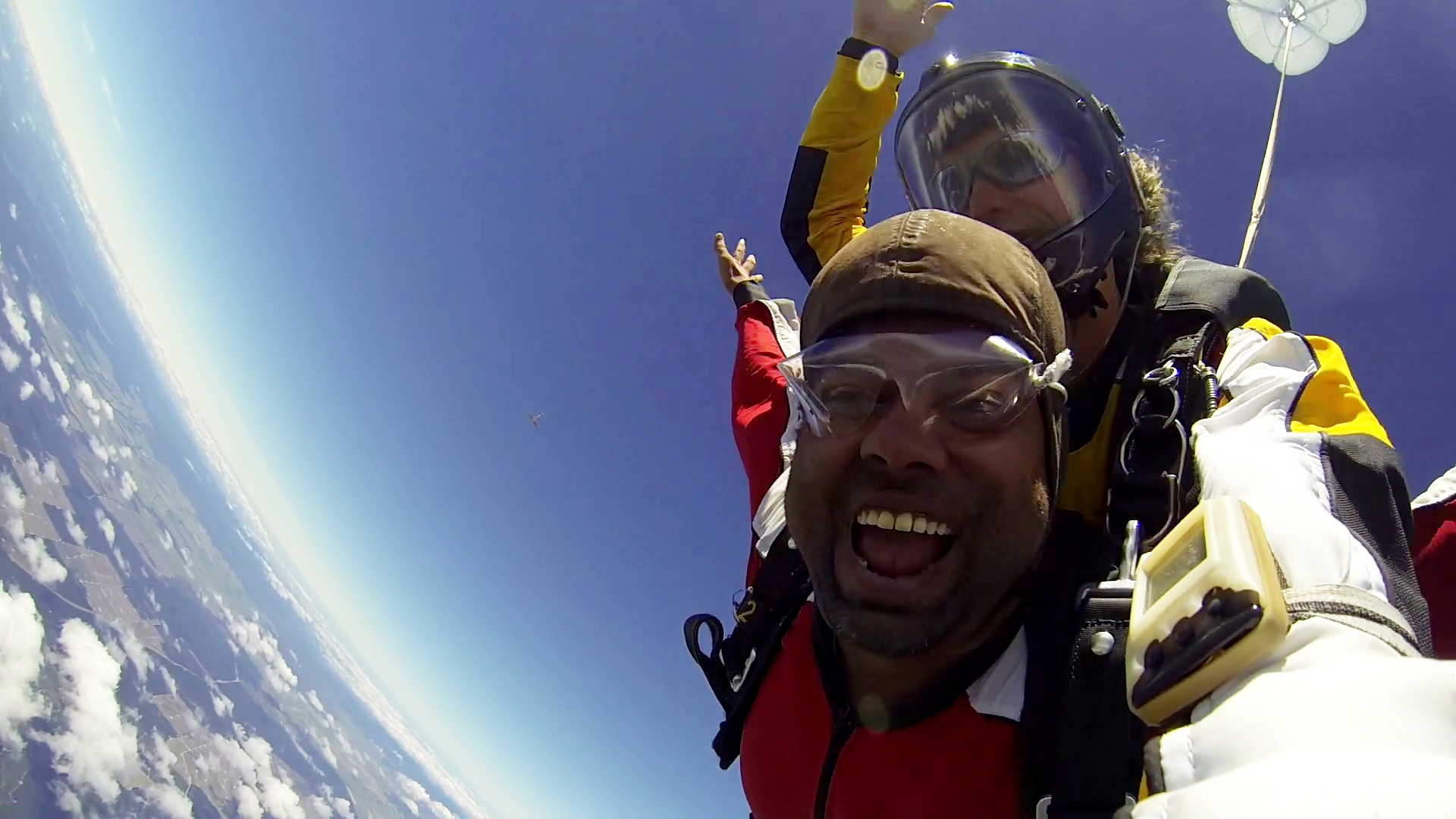 That minute of free fall was just magical. You can no longer be scared anymore because you know deep in your mind that you have absolutely no control of what's happening, you just resign to that fate and simply enjoy the ride. The cold air gusting on to your face; the attempts to orient yourself; the beauty of the Earth swirling below and that pure raw rush! And then all of a sudden; you feel the pull of the parachute. Everything slows down. The next half of the journey couldn't have had a better contrast to what happened earlier. We flew like birds, swooping left and right at our whim, as the spectacular scenery below slowly grew in size and pinched you back into reality.

Everyone had their own stories to tell once safely back on the ground. But the best was Kalyani quipping nonchalantly that all she was thinking was about breakfast getting late while doing all those stunts up there. Proof of a true (brave) foodie!

Some craters and a desert road

Taupo was a very quaint little town on the side of a gorgeous lake. We had thought of it only as a stopover for our skydiving, but in the end we were a little bit disappointed that we didn't spend a bit more time out there. Within the limited time we did manage to visit a few places around though.

First up was the public thermal pools where you could take a bath in the natural geysers. It was a bit crowded, so didn't really get a chance to do that, but the park surrounding it was great to take a stroll in the evening. Walking across from the park you would reach Huka falls. The falls are not very high but the sheer volume of water flowing through it (apparently can fill an olympic pool in 11 seconds!) and the spectacle of the raw power of water hitting the rocks makes it worth a visit.

Another attraction nearby is the oddly named Craters of the moon. Despite the cheesy name, the place does have an out of the world scenery and would be an apt background for a Hollywood apocalypse flick. The region is still an active geothermal area and you can walk close to where nature's doing some cooking with rocks and mud. It was something we've never seen before and well worth the 45 minute hike. 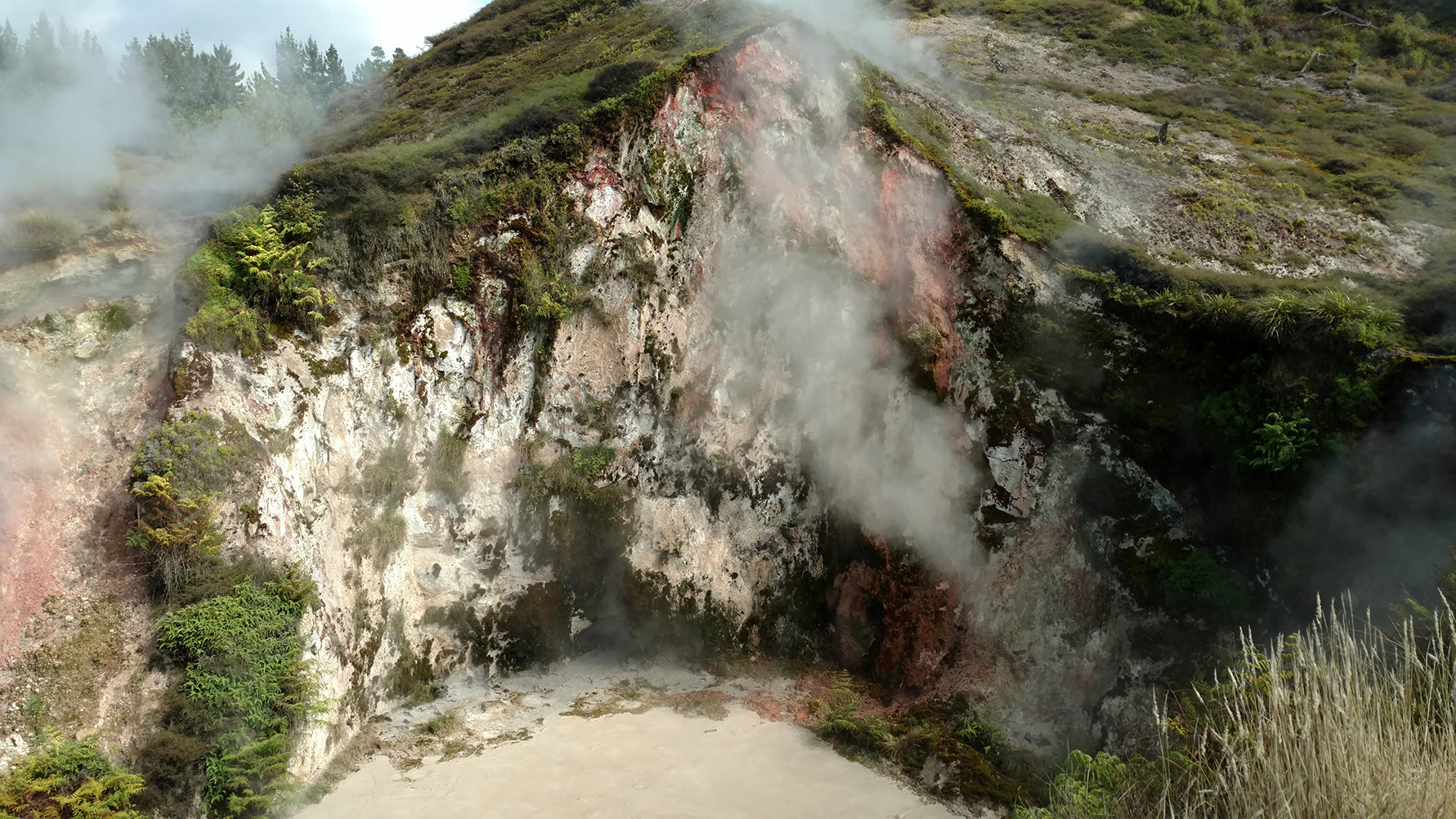 We continued down south towards Wellington, halting for breakfast at a lovely small town cafe. The drive down cuts through the UNESCO heritage site of the Tongariro national park. That section is also called the Desert Road because of its desert like appearance. Desolate and remote, but also exceedingly beautiful with large plains of bushes laying a golden carpet on either side of the road. This was also where a few scenes of the Lord of the Rings was shot.

So after the calm and quiet of the desert, the slow but steady rise in traffic made it clear that the city of Wellington was nearing. The long drive meant that we reached the city a bit late in the evening and we checked in to a hotel very close to the famous quays of Wellington. We met a childhood friend of Manju's, Nandini and we were lucky to have the company of a local guiding us through the city.

After dinner at a nice little joint called Havana we headed up Mt. Victoria to have a grand view of the night sky of Wellington. As the chilly wind blew and with a 360° view of city below us, this was the perfect place to chit-chat about the nitty-gritties of life in the different countries that each of us called home. An hour later bidding adieu to our wonderful host, we retired to our hotel, the last night up in the north.

The next day we had our ferry to the famed South Island, more on those adventures in the next part!