I hadn’t travelled much around India except for the south. So when Prema asked if I was interested in a Sikkim trip, I yelled my yes. After a long wait, the day finally came..

Getting there
Kolkata, Siliguri (West Bengal) 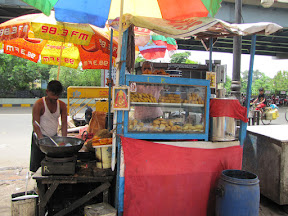 First stop was Kolkata, and I reached there by flight from Bangalore. The Kolkata airport was disappointing, a sad relic for a metro. I was to stay at the IIM hostel, arranged for me by Gayathri, Prema’s friend and my soon to be co-traveller. The way to IIM (at Jokha on the other end of the city) was filled with curious sights and sounds. Kolkata took me totally by surprise, I was expecting a modern city with fancy buildings. But what met me where old dusty streets, colonial era buildings and narrow lanes filled with cycle-rickshaws. Even though initially it felt like a city stuck in the ’60s, thinking back I guess that gave an amazing charm to the city, that was very different from the other Indian cities I’ve been to. 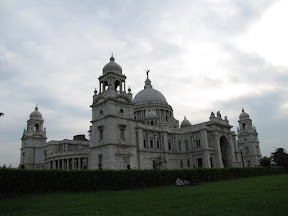 Next day morning, we got out from Kolkata and visited some places around the city, including the Indian Museum, the Howrah bridge and the Victoria Memorial. And we were joined by the fourth traveller in the group – Deepak. By evening, after roaming around the city on rickshaws and shared taxis we reached the Sealdah railway station to catch our train towards Siliguri.

New Jalpaiguri (the Siliguri railway station) is the starting point of the famous toy train to Darjeeling. This was initially in our plans, but reaching there we found, to our disappointment, that the toy train was closed due to torrential rains and Darjeeling was on strike due to the Gorkhaland issue. With a quick change in plans, we decided to move to Sikkim a day earlier. 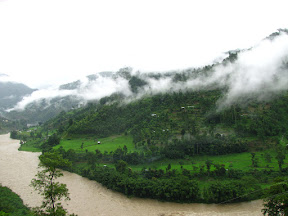 We met our incredible driver – Mr Anjun Rai from Darjeeling – at the railway station and he was to take us up to Sikkim on his Innova. As soon as we neared Sikkim the whole landscape changed and we were now in the vicinity of the foothills of the Himalayas. The roads that were already in difficult terrain, were damaged due to heavy rain. But our ‘Schumi’ negotiated all the curves, bumps, landslides, waterfalls(!) expertly and soon we gained his complete trust. The scenery was incredible, with the road winding around green mighty mountains all around and the Tiesta river roaring in all its full glory below us. It is a sight to behold. And I would definitely rate this as one of the best (and also among the hardest) drives in India.

Pelling is famous for its majestic views of Mt. Kangchenjunga, but unfortunately the cloudy weather and all the fog around us made us miss the view. Pelling was an interesting little town though, with lot of sight seeing opportunities. We visited a few waterfalls and a rock garden. Next day we bid adieu to Pelling and headed to our next stop – Gangtok, the capital of Sikkim. 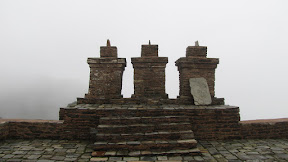 On the way back, Schumi gave us two unsolicited stop overs – one at Pemayangste and the other at Rabdentse. Pemyangste was the first glimpse (of many) Buddhist monasteries that we would visit. It was an interesting building, which is around 300 years old. The sights and sounds of the monks praying inside (no photos allowed, but you can visit the prayer hall) is something not to be missed. The second stop – Rabdentse, was our only little trek in the whole trip. It is a moderate 2 km walk on a well laid but slippery stone path away from the main road and once there you are treated with the ruins of the old capital of Sikkim. It is well organized, peaceful and full of green. We spend sometime there and after a few customary snaps we continued our journey through the mountains to Gangtok.

We made our tea-stall stop at Legship, a small temple town on the banks the Teesta. There’s a queer little pedestrian hanging bridge with the river thundering below. Spend sometime there having chai and laddu Sikkim style, with Prema engaged in her ‘streetscaping’ experiments. That was our last stop and we reached Gangtok by nightfall. 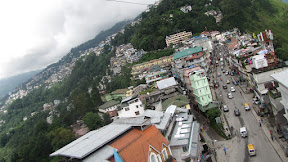 Gangtok is a lovely small city set on the side of a hill. Being the state capital it has all the stuff you need including movie theaters, petrol pumps (a rarity in Sikkim) and even a Dominos. In the morning we did a small tour of the places in and around Gangtok – visiting more waterfalls, monasteries, museums and the awesome nature. The best pick of the lot was the journey on a ropeway above the city which gave a magnificent grand view of the Himalayan landscape around. Our last stop for the day was Tashi view point, from where we were supposed to see Kangchenjunga. We thought we had finally managed to catch a glimpse, and we were quite certain that the peak we saw was Kangchenjunga. But alas after consulting with the locals, we learned that the clouds had cheated us again. What we saw was no where near Kangchenjunga :(

After reaching Gangtok, we had our lunch at the delightful Tangerine restaurant, an upmarket place. After finding that I had lost my watch when we reached our hotel, Prema and I decided to walk back up to the restaurant to try our luck. We were told of a shortcut to reach the place after consulting with a traffic policeman, and to our surprise we discovered the M.G Marg. A pleasant shopping street, devoid of vehicles. We bookmarked this for later and walked up the road to hunt for my lost goods. Luckily we found it at the restaurant. On the way back we called up Deepak and Gayathri to join us on the M.G Marg, for an evening stroll around the place. Highly recommend a walk on this street anytime you visit Gangtok. 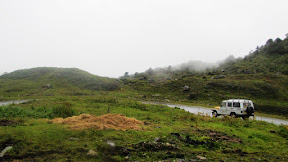 Next day morning, after taking permits from the tourist office, we headed towards the Tsomgo lake and the Chinese border at Nathu La – treading on a part of the ancient silk route to China. This was the highest point I’ve ever been in my life – around 16000 ft high at the Nathu La trading market. On route we saw the highest telephone exchange, the highest ATM and the highest post office in India. We didn’t have permits to reach the border, and had to stop at within 3kms of it. There’s a small memorial of an Indian general there and also a cafe called the Cafe 13000 run by the Indian army. Had some delicious momos (ok, maybe delicious is a bit relative) and a hot cup of coffee up here. We were not allowed to stay for a long time, and we headed back to the Tsomgo lake. There is a small market at the lake, where we had our brunch. The noodles we got were actually transported from China just a few kilometres away :). We chitchatted with the lady over there for a bit and it was time to return back. The roads were extremely difficult, and we had to take regular breaks while the army was working fulltime clearing off roads blocked by landslides.

Back to Siliguri
Gangtok – Pekyong – Rangpo – Siliguri
The way back to Siliguri was blocked again and we had to take a round about route to come down the hills. Sikkim’s new (and first) airport is coming up on this route at a village called Pekyong. That’s definitely going to make access way easier to this amazing land. We finally bid goodbye to Sikkim and to our wonderful driver Schumi at the Siliguri station. That also ended the first leg of the trip with Deepak and Gayathri leaving back to Kolkata and Prema and I going to Bodhgaya. 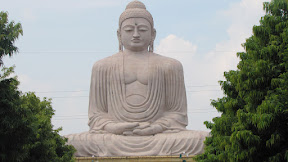 Bihar was all what I expected and more. It is a totally different world out there and the place does lives up to the tag of the wild wild west of India. Our train had taken us to Patna, and a Rs.70 bus ride took us to the Bodhgaya gate on the highway. It was already quite late and we had to travel 3km to reach Bodhgaya proper. We met a monk, a local and two Dutch guys there, and our queer gang managed to get a shared auto up to the city. We didn’t have bookings, but managed to find a decent hotel not far from the town center.

Bodhgaya is sort of an oasis amidst the chaos of Bihar. It was a very spiritual place, and it looked like a international meeting place of countries and cultures. Lots of monasteries and Buddhist temples belonging to countries from around the globe. We visited most of them including the ones from Thailand, China, Japan, Sri Lanka, Tibet, Bhutan and even Bangladesh. The main attraction though was the Mahabodhi temple, were Lord Buddha attained enlightenment. It’s a well preserved monument, and its a joy to take in all the peace and serenity surrounding it.

Our train back was at 11PM in the night, but we decided to get back to Gaya, basically because it was a bit risky to travel late on the Bihar roads. It was time to wind up the long trip, as we waited a long wait at the Gaya railway station telling each other the interesting bits of our lives :D . And as we did that, the Rajadhani Express to Delhi, rolled in to the station.. And that was it, a great 10 day experience.